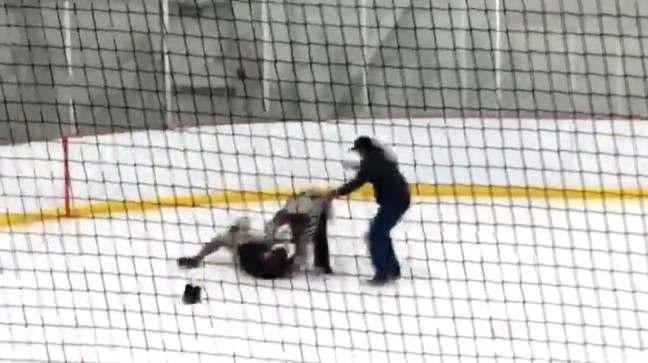 A fight over the weekend at a 3-on-3 youth hockey tournament in southern Alberta has resulted in criminal charges.

Lethbridge police have charged a man from Standoff and additional charges are pending against a second man after a referee and coach were assaulted.

According to a media release, on Sunday afternoon police responded to a report of an assault at the Crossings Ice Centre.

An investigation determined at the end of the game a 10-year-old player was involved in a verbal altercation with a referee which escalated to the boy striking the ref twice with his stick and the ref pushing him to the ice. At which point a group of adults, including coaches and a relative of the 10-year-old player came onto the ice. A coach from the opposing team was shoved to the ground and the referee was punched multiple times by the boy’s relative and a second man before the fight was broken up.

The relative was arrested without incident but the other man left the arena and police are attempting to locate him.

The 10-year-old boy was examined by EMS and was not injured. The referee and coach both sustained non-life-threatening injuries.

55 year-old Robert Farrell Creighton of Standoff is charged with one count of assault. He was released from custody and is scheduled to appear in court Oct. 9.

Assault charges are pending against a 36-year-old man who fled the scene.

A video posted online shows the altercation at the hockey tournament.